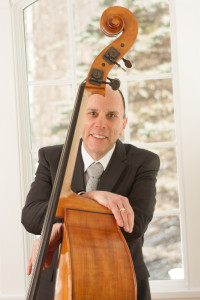 Since 1971, I have been performing professionally as a free lance musician in the Connecticut / New York area, in ensembles ranging from duets to big bands and orchestras. These performances have been in different settings, from concert halls, theaters, private parties and weddings to restaurants and clubs.

I have been fortunate to have worked and studied with fine musicians and educators in all styles of music.

Early Performance experiences include :
Electric bassist with the popular soul band The Aristocrats of Norwalk, CT. The Aristocrats opened for acts such as: Kool and the Gang, Junior Walker and the All-Stars and the Unifics. The band also won the famed Amateur Night at the Apollo Theatre. I have also performed with the Platters.

For our wedding, we elected to use Jim Scianna and his group of talented musicians. His music and professional demeanor contributed to our perfect wedding day. Their music was an elegant addition to our wedding and was a topic of conversation among our guests. Many people were impressed with their smooth, melodious sound that was both effortless and entertaining. Not only were they excellent and accommodating, but they also have a sound and musical ability that is unmatched. We cannot say enough about Jim and his group and would just like to thank them for helping to create lasting memories of love for our families and us.

My husband and I got married September 1, 2012 at the Webb Deane Museum and Barn in Old Wethersfield. We had an incredible celebration that included live music as well as a DJ. A duet including bassist Jim Scianna, and pianist, Chris Casey entertained as guests arrived, during the ceremony as well as cocktail hour. Jim Scianna was a great help even during the planning stages of the wedding. He gave me an abundance of options regarding music selections while also providing his insightful and professional opinion on my choices. He was able to stay well within our budget and provide us with an exceptional experience. The live entertainment added such class and timelessness to our event and created a beautiful setting for the most amazing day of our lives. I love thinking back to the guests buzzing about the stunning grounds, playing lawn games, enjoying hors d’oeuvres amongst the backdrop of such elegant music. It was evident that Mr. Scianna is not only passionate about his music but also passionate about following the client’s vision. We had a remarkable wedding and we feel so fortunate to have had Jim Scianna Duet there to add to that electricity.

Having the Jim Scianna Trio perform at our ceremony and cocktail hour added a level of elegance that we could have never achieved with having only a DJ. The music was not only extremely fitting and of the highest quality, it most importantly complimented the flow of the wedding and transition into the reception with the DJ. Jim’s attention to detail coupled with his experience truly alleviated all stress typically associated with planning the music of a wedding. He came to me with all of the things I needed to consider and helped me make all of the right choices. In addition, he did a wonderful job coordinating with both the venue director and DJ, leaving my husband and I free to simply enjoy our day. I highly recommend the Jim Scianna Trio if you are looking for a touch of elegance and true professionalism.

The joy of my daughter’s wedding day was greatly enhanced by the outstanding music provided by Jim Scianna and his fellow musicians! I would highly recommend these performers to anyone seeking first class musicians whose musical skills and people skills are of the highest order!!

It has become a tradition that we have Jim Scianna and Chris Casey perform their music at our annual holiday client party. Our clients are special “family” to us and we like to celebrate the season in some way each year. While the food and raffle gifts are part of the festivities, it has become a special tradition that we have Jim and Chris entertain us with their wonderful musical renditions of holiday songs. Our “family” loves their music and we all have a wonderful, relaxing time. In a hectic season, it is great to enjoy some time truly being entertained.